Skateboards are wheeled vehicles that date back to the 1950s. Created initially as a terranean substitute for surfing, the original boards were essentially just planks with wheels attached to the bottom. While today’s skateboard is a far more advanced piece of engineering, the skateboard hasn’t strayed too far from its roots.

The defining feature of the skateboard isn’t its actual shape, but rather the curved ends. In fact, this is where the difference between skateboard and longboard riding becomes most readily apparent.

Both the front and back of a skateboard curve up to create lips, which can be leveraged for any number of tricks. Whether you’re going old-school with a simple kickflip or you’re trying to do something creative and new, it’s these curved edges that are going to push your ability to take the skateboard into the air forward.

The skateboard is also a relatively small vehicle, usually clocking in at just under thirty-two inches. Size matters when it comes to the skateboard which marks perhaps one of the biggest differences between skateboard and longboard construction.

The skateboard is absolutely one of the most maneuverable and versatile vehicles you’ll ever find. Able to take tight turns with ease, you can weave in and out of obstacles with relatively little effort. The size and design also make it very complaint to tricks, whether through grinding on raised surfaces or going airborne off of a ramp.

It’s also very easy to pick up a skateboard and put it away while you’re on a bus or in a car. This makes it much more efficient for those who need to cart around their boards without riding them. 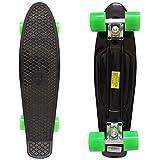 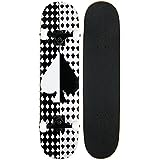 There are, however, things at which a skateboard tends to fail. This isn’t a device for just cruising down the street. That’s because the shorter deck makes it very hard to keep any type of stability. You’ll also have to continually use your feet to generate thrust if you aren’t going down a hill, again due to the relatively short nature of the board.

Skateboards can also be a bit uncomfortable to ride for a lengthy period of time. These boards just aren’t big enough to accommodate an adult rider who is standing relatively still. Simply put, the skateboard is better for doing tricks than getting from point A to point B.

The longboard is a relatively recent creation, only coming into true prominence during the 1990s. While longboard designs certainly date back earlier, they’re more of a response to perceived failures in the skateboard than anything else.
The longboard aims to recreate the experience of surfing or snowboarding on land to a much more significant degree than the skateboard. On the other hand, it had to sacrifice some of the functionality of the other vehicle in order to create a very different experience.

As you might imagine, the defining feature of the longboard is its length. Far closer in both shape and size to an actual surfboard, longboards are typically up to around fifty-one inches in length.
Furthermore, the longboard also features softer and larger wheels than the skateboard. This makes for a very different type of handling than its predecessor. Though there’s certainly no argument that the longboard is its own vehicle, it often is considered a skateboard variant rather than its own unique type of design.

If the skateboard is an aerial trick vehicle, the longboard is all about staying on the ground. The added length means added stability. Therefore, it’s entirely possible to cruise around on a longboard and to use it to get from one place to another remote point.

You don’t even really have to keep pushing off on a longboard. Learning how to get forward propulsion by pumping the board is one of the first key lessons that any rider will learn. Longboards also tend to be easier to learn how to ride, since they are easy for maintaining balance and easier to control when going downhill. 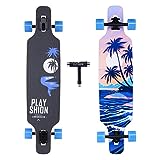 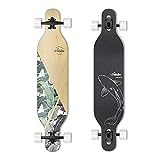 None of those features make the longboard objectively better than the skateboard, though. The difference between skateboard and longboard riding is significant, especially if you want to do tricks.

A longboard isn’t great for trying to get in the air. Therefore, many tricks are almost impossible due to the lack of curved edges on the board. Grinding is likewise much more difficult on the longboard. In other words, most of the tricks you’d want to do on a skateboard are immediately ruled out. This isn’t something you want to take to a skate park, but rather something more suited for riding around town.

Difference Between Skateboard and Longboard

So, what is the major difference between skateboard and longboard construction and riding? The obvious difference is always going to be in terms of size. The average longboard is longer than the average skateboard by a good bit.
Longboards also have larger, softer wheels. These are not fit for the same kind of tricks as those found on a skateboard. Skateboards have curved edges that allow for popping into the air, while longboards have a wider and longer build that makes for easier riding.
The evolution of the two types of board has diverged significantly. Their usability makes the skateboard more of a trick vehicle and the longboard more of a cruising vehicle.

The difference between a skateboard and longboard riding and construction are significant enough that being a master at one won’t necessarily make you a master of the other. They are closely related, though, and you can take the basic skills from each and apply them to their counterparts to cover the starting point. Neither vehicle is inherently better than the other.
Recommended Read: Best longboards for beginners

This site uses Akismet to reduce spam. Learn how your comment data is processed.